On Windows7x64, I receive "unable to find a core driver package that is required by the printer driver package" when installing any new printer

I originally ran into this problem trying to fix my Adobe PDF (virtual) printer, but now I receive this error message when I attempt to install every printer. I went to Control Panel and validated my copy of Windows 7. I am up to date on al the required updates.

Unfortunately, my System Restore only went back a month. I have no idea when the ability to access the "core driver package" went away, but I've already gone back to my earliest remaining System Restore.

A. User
Hello,
Thank you for posting your question on Microsoft Community Forum.
The issue may arise if the driver for the printer is corrupted or else if the full feature pack of the driver is not correctly installed. So, I would suggest you try the following steps and check if the issue persists:
Method 1:
Uninstall all the driver packages installed in your system completely from the Programs & Features.
Now, reboot your system and install the driver from the printer driver disc.
If you do not have the disc, install the full feature pack from the manufacturer's website.
Method 2:
You may also try to run the following troubleshooter and check for the issue.
Diagnose and fix printer and printing problems automatically
Also, you my refer to the troubleshooting steps as suggested in the following link:
Fix printer problems
Hope this information is helpful. However, if the issue still persists, please post back with your answers to the asked questions and your results to provide you with further assistance.

To answer your questions as best as I can:

2. I don't know. I had a huge problem on Jan 16th getting an "HP Photosmart Premium C410a" to work, and I still only have it working as a printer, but not as a scanner or fax machine. But other than that, this problem shows up when I try to add a printer, which is fairly infrequently.

3. My system is not on a network domain. It's Win7x64 Ultimate, with Bitlocker enabled.

4. I am trying to install the dirver that Windows has built-in when you go to ControlPanel->HardwareandSound->DevicesandPrinters->Addaprinter->Addalocalprinter->Useanexistingport->FILE:->HP->HPColorLaserJet2800SeriesPS

If you are interested in why I want to install this printer, see:

With regards to Method 2, I ran the troubleshooter. I asked it to look into the "Adobe PDF Converter" printer, and the only thing the Troubleshooter found was that it was not the default printer. Making it the default did not fix the problem I had printing to it. To be fair, the only reason I have this printer around is because it was installed a long time ago. All my attempts to install it with Acrobat X or Acrobat XI have failed, presumably because of the "core driver package" problem.

Here are two of the error messages that I receive: 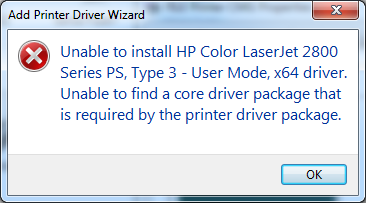 Thank you for looking into this. I was hoping there was some way to ensure my "core driver package" is functioning properly. The little bit that I've been able to find about this problem online talks about some magic "NTPRINT.INF" file that I was hoping if I could find after doing the right "expand" command line on my Windows 7 install disc, I could use to ensure the registry entries and DLL's for the "core driver package" are all the way they are supposed to be.

8 people were helped by this reply

Thank you for keeping us updated on the issue.

You may also refer to HP support website for further troubleshooting:

Try to install the printer in new user account.

If that does not help then I would suggest you to create a new user account and check if you are able to install the printer driver.

Hope this information is helpful. Please do let us know if you need further assistance, we’ll be glad to assist you.