But some issues, generally related directly or indirectly to some corruption in system files, windows update may not work properly. This article discusses resetting the Windows update completely using a reset script.

The script does the following things:

In  any case, if you cannot download/run the script, copy the following code in notepad and save it by "WUReset.bat" (with quotes) and then run it subsequently:

Is this Script Safe?

Yes, the script is absolutely safe to use. The code is created with the help of Shawn Brink, who is an MVP of Microsoft. You can look into the source by right-clicking the bat file and selecting edit.


Special thanks to  Askvg and Tenforums and Denis for the help I have tested an amended form of the batch file. It now does what I expected it to do. I suggest amending the batch file to include the additional line

I cannot know how many users have this alternative qmgr location. All I know is that both mine do & neither of them has the qmgr location given in the original batch file.  I clean installed Windows 10 on both computers during August.

At the risk of boring you:-
1 The reason I thought something needed to be investigated was that, after running the original batch file [and the many similar ones such as the TechNet version], then manually running Settings, Updates it searched for updates even though it was not connected to the internet or to any other computers and produced results [a list of updates to be downloaded - the listed updates were those that had been found during a previous update search]. So I concluded that the previous queue had not been cleaned out by the batch file.
2 After running an amended batch file that deleted the qmgr files in the alternative location, running Settings, Updates resulted in an almost immediate response that it couldn't connect to the update services [no list of updates was displayed]. This new behaviour makes sense because the computer was still not connected to the internet or any other computers.
So, the amended batch file successfully reset Windows update, including the update queue, whereas the original batch file did not.

The subject is of particular significance to me because I use a metered internet connection and I sometimes run Windows update to see if there is anything large enough to warrant going to the free & fast WiFi in my local library. I need to reset the update queue so that I can run Windows update from a clean start - otherwise it would continue with the existing list of updates and only afterwards would it bother to search for new ones [new ones that might supercede those that I have just wasted my time downloading & installing].

Sumit - Insider MVP
Thanks. I ll do a bit of research this weekend on this and would let you know how testing the ammended script goes on both of my systems.
Sumit
Windows Insider MVP 2018-2021 and Moderator

By the way, TenForums have now included the extra line in their version of the batch file.

Just to keep you up to date, the TechNet script [upon which the TenForums batch file was based] has now also added the extra line.

Thank you for the noticing this one. As you said, I see that both of the locations- the one you mentioned and the old one do contain qmgr files. I do not know when this happened, but I have updated the script.

Again thanks for your collaboration.

https://www.yourwindowsguide.com
PI
PigFarmer
the downloadable batch file is 65 lines an is 2k  . the batch file offered as copy the following code has 190 lines and is 5k is there a difference or does all the blank space in the bigger file inconsequential ?
DV
Dvj2302

This is what happens to me if I attempt to run this file. Kindly help since Win10 Cummulative Update KB4015438 has failed to install since 24/3. 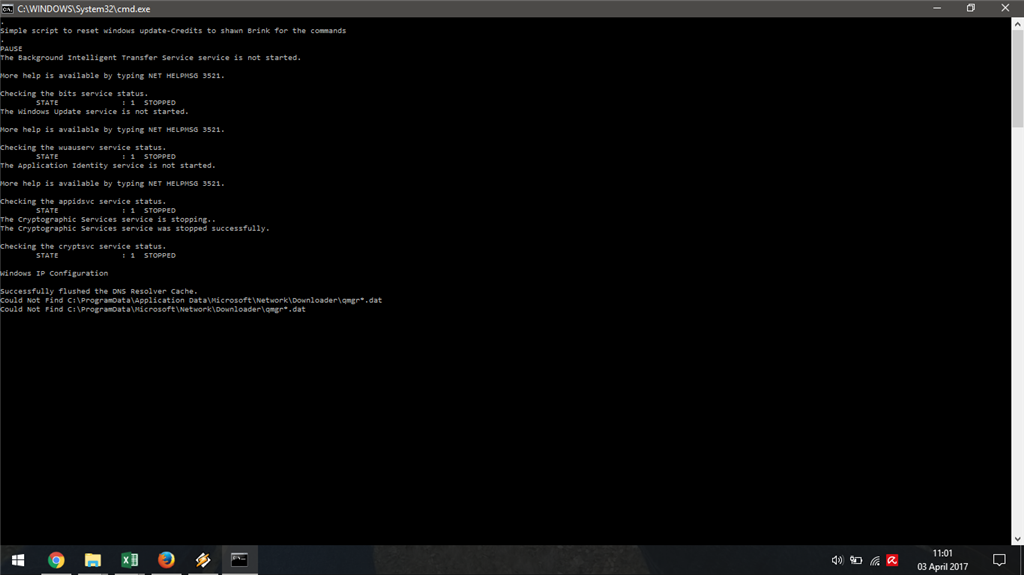 RA
rayhanalam
thanks mic
AN
AnthonyPartridgeXT
Followed instructions to the letter. Fixed all problems and works as advertised. Thank you very much for the help!
TL
TLShearer

I ran this on my computer in order to fix update issue KB4015438 failing to install. Was having problems with my Wi-Fi disconnecting at will. I am not a geek, I am learning as I go.  Now when I restart I get an error on initializing 0x80070005. Defender shows same code when I click on it.

Have I made a terrible rookie mistake in running this program? Please help!