Ever since installing the Fall Creators Update, using a pen on a tablet or laptop screen doesn’t behave as it did before.  Instead of selecting text or files, the pen now scrolls.
This thread is locked. You can follow the question or vote as helpful, but you cannot reply to this thread. The Fall Creators Update implements a new interaction design to better utilize the features available to most pens in the marketplace. No pen behaviors were removed, but some actions have been reassigned to make pen behave more consistently across Windows. Previously, pen tip performed a wide variety of actions, from selection to drag-n-drop to content manipulation, while barrel button function was underutilized in the system. In the Fall Creators Update, we are making the barrel button more useful by assigning it selection and drag-n-drop functionality, while making the pen tip more useful for content manipulation, like scrolling. While these changes might seem uncomfortable at first, they make pen a more versatile tool that enhances current user experience and will enable future exciting experiences. 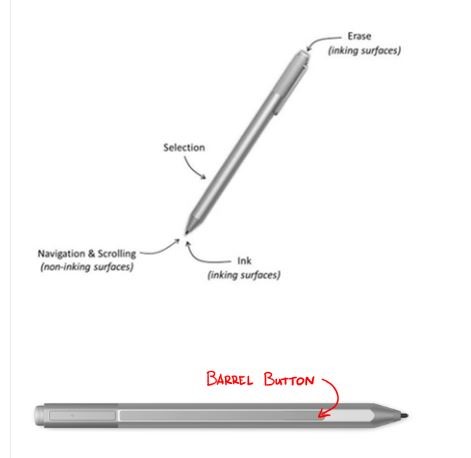 Although pen is most useful for inking, in places where inking does not make sense or is not yet available, pen can now directly manipulate content the way your finger does. This functionality is available to most applications, such as File Explorer, Edge, or Start Menu, where you can now scroll without the help of a scrollbar and manipulate text selection through grippers. This change eliminates the need to hunt-and-peck for UI elements and prevents users from constantly switching between pen and other input modalities.

Barrel button also gained meaning in the Fall Creators update. Now, no matter what you want to select within the system, whether it is text in Edge, ink in OneNote, or files in File Explorer, you can do it by pressing the barrel button and dragging. Drag-n-drop with the pen is just as easy – press the barrel button, grab an object with the pen tip, and drag it to a new location.

Making behavioral changes is always difficult. To avoid confusion and bad user experience, we worked with software developers, both internal and external, to properly react to the pen changes. While we reached out to most developers that see considerable pen usage in their applications, we did not hear back from all. If your favorite application is behaving incorrectly since the latest update, please report it by emailing *** Email address is removed for privacy *** and we will work with the developer to correct any issues.

7 people were helped by this reply