Win 10 thinks that my speaker jack is a microphone jack.

I did a fresh install of Win 10 Home on my PC that used to run Win 7. Under Win 7 it recognised my speakers which is a cheap two speaker system powered by a USB port with built in amp, and just a simple audio jack and plugged into the green socket on the back of the PC. Before I upgraded I was able to play music from this. However, after the fresh install the speakers aren't recognised. Instead in the Playback tab of the Sound dialog I get four disconnected entries that say Audio Digital (HDMI): 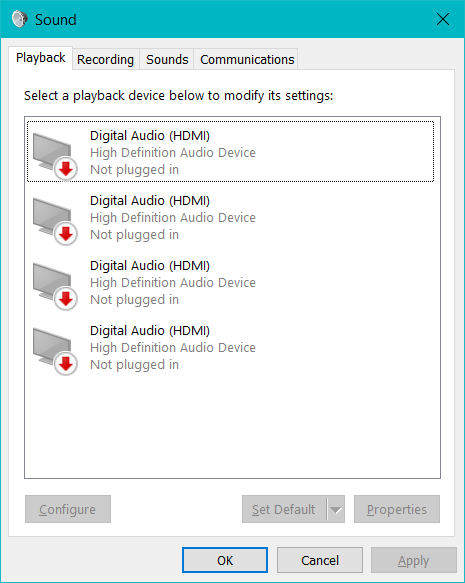 Now I DO have a graphics card on board and that has a HDMI out (installed so that I could play Space Engineers and No Man's Sky), but I'm still using an older monitor with a DVI connector and NO built-in speakers. At the same time, on the Recording tab of the Sounds Dialog, I have this showing: 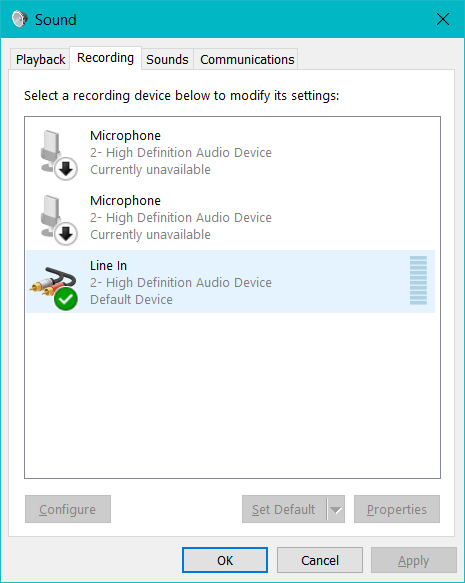 But of course I have NO microphone plugged in, it's the speakers instead, and in the correct socket as well. When I run the Troubleshooter from the Sounds it just says "no device is connected", and from the Device Manager it says that "the drivers are up to date".  No I suppose I could just spend $$$$ to b a newer monitor that runs HDMI and has speakers (and I might do that in the future)  but I'd rather  sort out this issue without spend any more money.  The PC's specs are (from a HWiNFO64 scan):

Suggestions please. I just want to get my sound back

I was eventually able to resolve this issue by changing monitors. The old monitor I was using had no built in speakers, and I replaced it with an LG 24UD58-B, which also has no speakers, but does have an audio jack in the back of a monitor.

I shut Win10, replaced the monitor and booted up. Win10 adjusted for the new monitor and installed an appropriate driver. This time it showed the device working on the Sound tab: 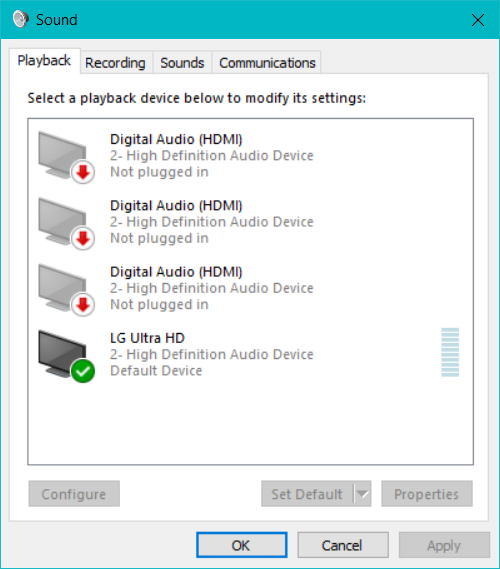 I unplugged my simple amp/speakers and plugged them into the jack plug on the rear of the monitor, and tested that by attempting to play a system sound. There was still no sound, but this time I found the problem was with the internal setting on the monitor. I pressed the button on the underneath of the monitor, selected MENU and then QUICK SETTINGS, and then VOLUME. The volume had defaulted to 0% and Muted. I hadn't noticed this on the other PC I'd been using the LG monitor with because that was still running Win7 and the jack on that one was working OK.

I changed the setting to 100% (It's easier to adjust the sound in Windows than the monitor menu or the volume control on the amp) and Unmuted it and now I have sound!!!

Last updated January 23, 2021 Views 645 Applies to:
This site in other languages