This is caused by a common combination of Skype as well Google Chrome. Similar issue with other programs could also cause 100% disk usage. To fix this do the following:

and untick it. See Figure-1 below: 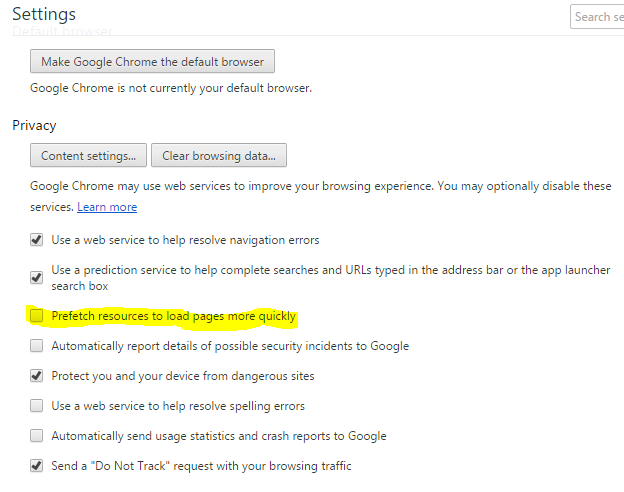 Click the "Edit" button and then highlight "ALL APPLICATION PACKAGES" and place a tick in the "Write" box. 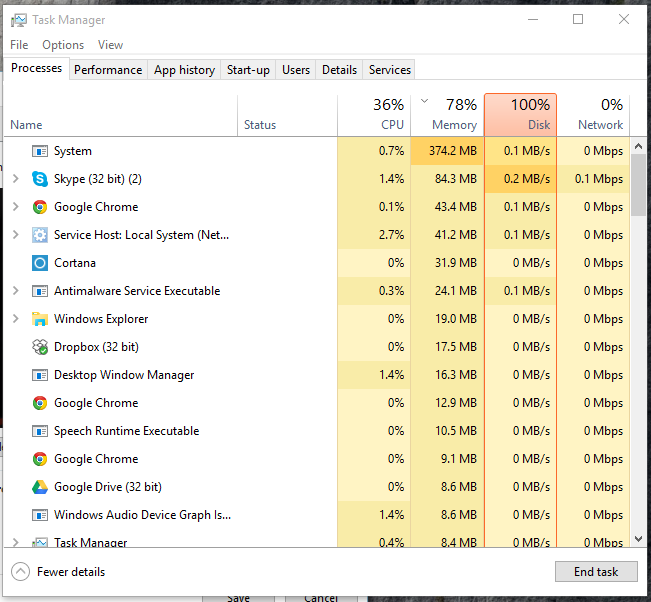 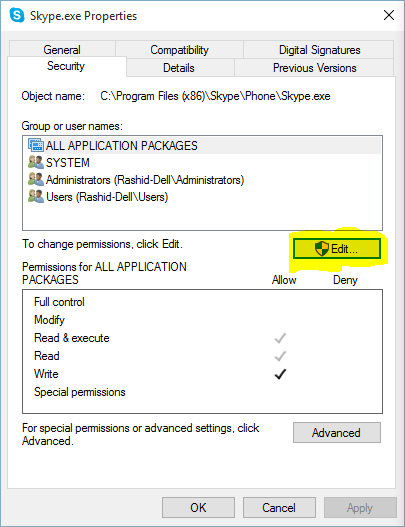 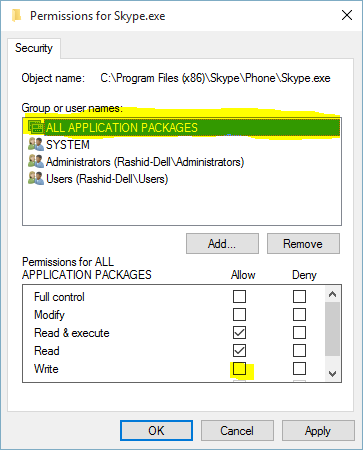 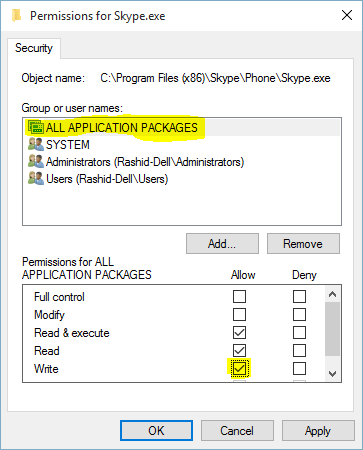 This is it, now run Skype and check the Disk Usage in Task Manager and it will no longer show you 100% disk usage anymore:- 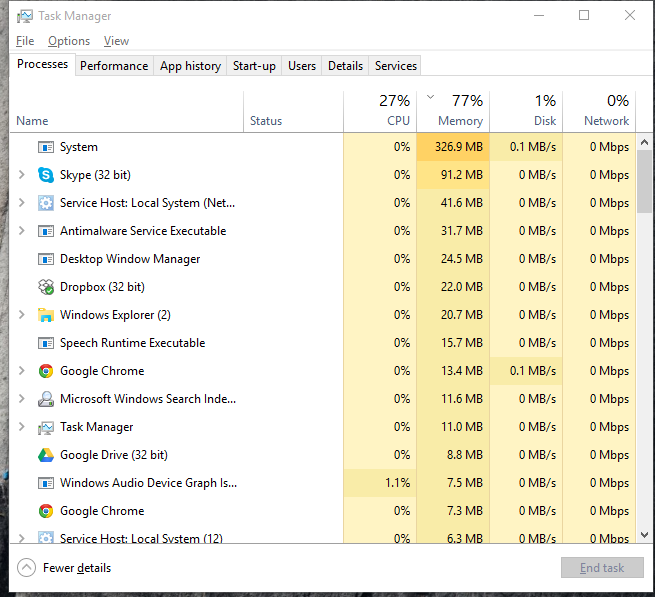 I hope this helps people. I spent a long time in finding a solution to this problem.

Disk going to occasionally 100% can be quite ok if the computer keeps running and eventually gets under control....but did your machine hang (unable to do virtually anything as mine does) ?

Defender did that to me  .... I replaced it with Panda Antivirus and thought all was ok..  but eventually the same thing happened. Many of the solutions portrayed in this thread seem to solve the problem for as long as a few days....then all hell breaks loose again.

My laptop, a year old AMD 10, gets under control at around the 2 minute mark.  I am not having any issues at all using Windows 10 after that.  I am just using Windows Defender.  My original Windows on this PC was Windows 8.1, and the Microsoft Store upgraded the O/S on this particular O/S.  The Operating System is the 64 bit version of Windows 10, according to system settings.

I did have an older laptop that seemed to get hot, a Toshiba AMD X64 Duo Core, (2.0 Ghz), (Vista), when I put the ISO for Windows 10, 64 Bit on it.  It ran super, but hot, and the new battery would only last a hour.  After 2 weeks I went back to Vista, and the old laptop is again working fine again, and the battery lasting 3 hours.

The other laptop I upgraded myself was an Acer Netbook 1.66 Mhz. Atom, 1 GB RAM, and it is running more robust with Windows 10 than when it had Windows 7 on it.

I was going to say that the problem might be Windows 10, 64 bit, however, when I check Settings in my AMD 10 it does say I am using a 64 bit operating system, and 7.19 GB are usable, so I do not know the answers on this issue.

True. These solutions seemed to work fine; but only for a while.

For me the disk usage stays 100 for about 5-10 mins, and it ocassionally goes up sometimes but doesn't hang. Mine is a 64bit machine

A. User
Almost exact same thing here.  I've tried all the remedies with no success.  Even added another 16 gig of RAM and cleared over 200 gigs of disk space. Have shut almost everything down. Still same hang up. I really wanted to like Win 10 but guess I don't have a choice but to go back to 7.
SP
Sreekanth Pamidighantam

hi, i have reverted to win 7 on 2 laptops - dell studio and lenovo note book.

it disappeared after the patch.

if it helps you please post and i can try again for my laptops.

but i guess it is important for the vendors to certify else stay with 7..

A. User
I finally called Microsoft support and to their credit the tech spent 1.5 hours with me trying to troubleshoot the problem.  The tech was very thorough and tried many of these same recommendations to no avail.  Finally recommended reverting back to Win7.  Unfortunately, the system is so crapped out that it keeps locking up when trying to revert back.  It looks like I'll have to install a whole new fresh install.
MI
MicahJM

In my experience, OneDrive was mostly to blame. After disabling it and only running it when I needed it, things were better. However, it still happens to spike up too often for my pleasure, and I can't lock down on a source of the problem.

Conclusion: I'm just going to bypass all of the disabling stuff, tweaks, downloads, etc. and just get an SSD.

I guess it's a painful process for the consumer to be pushed to buy computers with SSD's that we didn't need before, but I think it will be worth it.

Edit: I get up today, turn on my computer, and this happens:

I was not doing anything at all. All of this disk usage was set under a couple of "system" processes. Seriously? Windows 7 didn't do this. I am still going to stick with 10 and get an SSD, but this is still ridiculous.

A few minutes later, I found that Skype was evidently causing much of this, so I uninstalled it. Things went down for five seconds, then System and compressed memory ate up the new available disk usage. Again, this is ridiculous.

Edit 2: Can't get anything done. I'm getting more and more ticked off at Microsoft by the second.

DA
Darktangent(2)
I don't have skype or chrome yet I get this issue every single day...my computer just totally freezes for 30 seconds or so.  I already had to get rid of my antivirus software (avast) because of a problem with start menu and cortana.  This is just ridiculous.  What do I have to do to get windows 10 to work?  I want windows 7 back.  I knew I made the wrong choice upgrading.
ER
ErichAseltine

The Microsoft Store installed Windows 10 on my laptop.  The laptop first after the install was staying at 100% for 10 minutes, and then would go down from there.  They kept it for 1 week.  After I took it home, it was going at 100% for 10 minutes and then go down to the 5%-8%.  Doing that Google trick as the 1st poster suggested lowered the 100% to 2 minutes, and then it drops almost to 0%.