Windows 10 has no tab for the Start Menu properties. 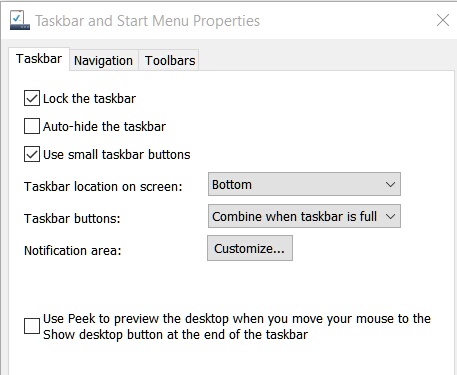 I now see settings in Settings, Personalization.   However, when I choose "Use Start Full Screen" all I see is a big blank screen.  I was hoping for an "all apps" toggle to switch between the Start Menu and the 8.1 screen with all icons.  Each style has advantages.

If it makes any difference, I have a laptop.

Hi I have the same issue.
I do notice that the apps were not upgraded by the upgrade process. I have some difficulties to grap he store app.
even after upgrading all the apps and the store app the start menu/screen is blank.

Switching to tablet mode did not help.

I have a hybrid laptop (Lenovo Thinkpad). According to the Lenovo "system update" Tools all my drivers are up to date.

Searching the web i notice there some bugs involving the start menu and the action center. But this one have survived the RTM screening process. :-(.

NE
Netmouser13
I have another post here with an image that shows the Start Menu sometimes only displays Power and All Apps, I reboot and then get the full menu.  It repeated several times when reinstalling my HP printer (because Windows 10 broke the scan feature), so this may be a conflict with activity such as this.
MA
mattmc1989
My start menu somehow changed itself to the start screen from windows 8.1 and its somehow got rid of the properties tabs when i right click the task bar and blank spaces on the start menu itself. Ive tried numerous forums and windows tutorials but the menus they get on them are completely different to what ive been getting.
KB
kburgoyne

From other threads I've read elsewhere and from my own experience on both a Surface Pro 1 and Pro 2, the "Start Menu" tab (in the dialog box shown in the first entry on this thread) was removed late in the Win10 release cycle.  So you'll find some references to it from people who were used to finding it during beta testing, but it appears to now be gone.  The "error" is the title of the dialog box still staying "and Start Menu", which clearly is very misleading.

If you go to "All Settings" from the Action Center (the panel that opens on the right edge of the screen) and use its search box to find "taskbar" in the settings, the search results will include "Taskbar and Navigation".  If you select that, you'll get the "Taskbar and Start Menu" dialog box (which includes a "Navigation" tab) as shown in the original posting of this thread.

When I upgraded my Surface Pro 1 from an earlier beta release of Win10 to the final release, I was CONVINCED I was no longer getting the full screen Start Menu.  I was searching all over the web trying to find the magic potion to restore it, and I wasn't finding any solutions.

In all my poking and prodding of my Surface Pro 1 trying to find a solution something started nagging at me.  The blank screen I was seeing when pressing the Windows (Start) button on the edge of the Surface seemed very subtly different between Tablet Mode and Desktop (non Tablet) mode.  However for the "most" part it looked the same.  Still had the menu and power icons as the only thing on the screen.

THEN it finally dawned on me maybe I WAS seeing the full screen Start Menu when I was in Tablet Mode, and the problem really was there simply wasn't anything on the menu.  I used the All Apps menu icon to open the All Apps window, pressed on an app icon until the pop-up menu opened (same as right-clicking) and said to add the app to the Start Menu. Suddenly I had a full screen Start Menu with a single app shown on it.  From there it was a matter of simply finding all the other apps of interest in the All Apps window and adding them to the Start Menu.

-- kburgoyne
MA
mattmc1989
Ive got the full screen start menu which i didnt want. It wasnt there after the initial install (in tablet mode) which was exactly how i wanted it but it just suddenly changed itself while i as scrolling through all apps, and wont revert back untill take it out of tablet mode. Eveything ive seen and read online says i can access the properties to change it but when i go to those properties the menu i get is the same as the one pictured at the top of the post, but online the screenshots/videos have a completely different menu that has a check box that removes the fullscreen start menu completely regardless of what mode its in. For some strange reason i can't even resize the start menu in or out of tablet mode either. Not having a problem with the tiles on it. I just don't not that damn fullscreen task bar because i hated it on win 8 and 8.1. its so frustrating because ive tried everything and nothing has worked! jcomputer21
The setting to turn off the full screen start menu is under settings (the gear icon), Personalization, Start, then set the 'Use Full Screen toggle so that it is not colored (to the left usually).

Windows 10 did not break the scan feature, it is a separate app called Scan, by Microsoft, within the Store.

DO NOT reinstall using your manufacturers drivers or you might do more damage than the Epson ones my mom used did. The scanner's driver should install when you plug it in (via an update), like in Windows 7.

jcomputer21
I agree there should be a way to get the all apps menu by itself (without causing the tiles to show up). The blank screen is likely caused by a corrupt tile layout file, you can fix it by dragging the tiles back out from the all apps section (as described in the Getting Started app).
NE
Netmouser13
JC - I reinstalled my printer and now the scan feature is OK.