I recently went to install all the current Visual C++ redistributable packages (2005 - 2017) and discovered that Microsoft has pulled the updates for 2012 and 2013 from its site:

Then I went to install the Visual C++ 2015 redistributable and encountered an install error that says, "Another version of this product is already installed." I opened the log file and it reads, "cannot install a product when a newer version is installed." 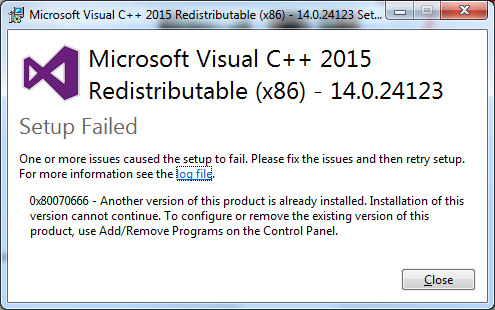 I understand that some apps may be very specific to bind to the exact version of Visual C++ dlls (eg. 2005, 2008, etc). However, it appears that Microsoft has replaced at least two previous versions in favor of the latest one. Where did those URLs in your post come from? Did you have them saved as bookmarks or saved in some file locally?

Please take a look at this page, it was recently changed to include current locations of redistributable packages.