This is a summary of the cumulative updates released on June 9th for all the supported consumer releases of Windows 10.

Important: Users posting replies referring to their own websites would be considered as Spam and would be suspended from this community. 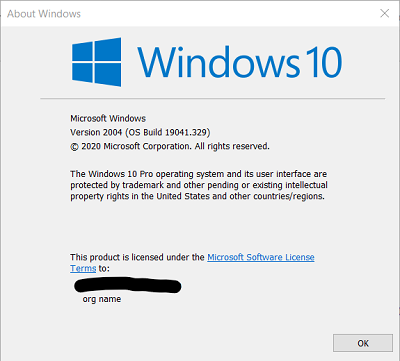 Once again, my computer began the stuck on starting Windows. Though this time, after restarting 4 times, Windows did a system restore without my permission! Uninstalled almost all my software and configurations, including Microsoft Office, GNS3, and other big apps.

This problem started the moment I updated from Windows 7 (had very few problems with 7).  This seems to be a ritual. This is on my tower where I do most of my work. On my two laptops with Windows 10, with no complicated software, I have very few problems (although I have had to reinstall Windows 10 on both of them).
I also use Debian, CentOS, and Mac OS... and none of them give me problems, only problems I get with them is when I know I am doing something riskay.

Please fix your Windows 10.... in all honesty, the only reason I still have it installed is because I love Microsoft OneNote (have not found an alternative I like), and the few gaming I do, else I would get rid of it and stick to just Linux and Mac OS!  GOD I MISS WINDOWS 7.

Sidenote; I have used Windows since before 3.11, back when you had the boot floppy disk, having to put programs in high memory and the sort.  Windows 10 is worst than Windows ME and Windows 8.  Horrible and a time waster.

I am getting the message below after installing these updates when I try and open Office documents using Office 2019: I have the same issue.

It's happening to a lot of programs.

We have several of our retail locations calling in with issues printing this morning. Many are getting the error:

Some, the application they are in just crashes or states that there is an error with the printer.

How do I solve this?

EDIT: I have verified it was this update. I went to a computer in which printing was working and had an update to install from yesterday. I installed the update and it broke printing, showing the message above.

EDIT 3: I have been successful on uninstalling KB4560960 which has fixed the issue on several systems. I was unable to uninstall on another system due to WIndows complaining that it could not uninstall.

I have the latest Firefox, if that makes a difference. Twice now, the Feature Update Windows 10 Version 2004 remains STUCK at 99% download.

Im not a computer kinda person but I would like to get this fixed. Any simple ideas on how to give it a boost so it gets a 100% download and then a 100% install ?

RA
RandyProWest
After installing the cumulative updates June 9th the laptop does not see the audio connection in our docking port. is there a fix for this?
RE
ReidD1
As soon as this update installed, my system stopped detecting my second monitor - which had been working fine until then. I can't find a way to get it going again.
BI
Bikegreeny

What a broken lot of updates I've had recently (see below) and finally, it's stable & OK.

Hopefully, future Cumulative Updates will be tested by keeping in scope a total view of what is systems; old and new, that are likely to be impacted.

This is not the first time that a Cumulative Update has broken my system. I'm not sure which update did this but prior to the last two updates cited above, this particular update trashed the Realtec Audio so that the speakers and headphones failed but HDMI audio was OK. I recovered from this by reinstalling RealTec with the compatible version from the Dell Support site.