LG's 34" ultra-wide monitor and Microsoft's Surface Pro (2017), save yourself the effort!

I have a Surface Pro (5th Gen) and I was attempting to use LG's 34" Ultra-wide Monitor (34WK500). I thought it would be great to have the ability to split-screen a paper and a browser window at the same time while both of those windows being, in essence, "full screen." Instead, I had an ultra-wide monitor that was only capable of displaying at 1920 x 1080 instead of the 2650 x 1080. I had the monitor set to display at the "original" aspect ratio, so everything would display correctly at the “suggested” resolution via the Surface Pro’s display settings. Nothing higher than 1920 x 1080 is even displayed as greyed out. Here are the lengths I have gone to rectify the issue:

I have swapped cables, swapped ports, as well as changed driver software for the monitor, integrated graphics, and Surface Dock. I have also troubleshot for the Surface Pro as well. I connected my old, dilapidated core i3 Surface Pro 3. Surprisingly, the monitor worked as advertised so long as the monitor was connected directly to the port on the tablet vice the Dock.

I have also researched this issue, ad nauseum, to learn that users of the Surface Book and Surface Pro 4 have had the same issue that I was experiencing. However, they all have the same thing in common: the mini display port to HDMI adapter. I have learned that there are active adapters as well as passive adapters. I am currently utilizing Microsoft's Surface Mini DisplayPort to HDMI 2.0 Adapter, which is listed as an active adapter, and has a max claimed resolution of 3840 x 2160p @60Hz as well as Twisted Veins HDMI cable which is rated at higher resolutions than what is required for the monitor to simply function correctly.

Needless to say, I have thrown in the towel and exchanged the monitor. I now have a gorgeous Samsung curved display which displays at the right resolution right out of the box. If you can get LG’s ultra-wide monitor to work right, go for it! LG’s monitor was beautiful when it worked and showed such promise but alas, it wasn’t to be for me and my Surface Pro.

JA
Jacked_Dancer
I just bought this monitor as well, and I'm having the same problems. So it is not possible even with the adapters? @Microsoft what's the deal here?
KE
KeishinTamashiro

I just bought this monitor as well, and I'm having the same problems. So it is not possible even with the adapters? @Microsoft what's the deal here?

For Surface Pro 4 to work, need to go to: SETTINGS > DISPLAY > Advanced display settings then under "Choose Display" choose "Display 2: LG ULTRAWIDE" and then click on Display adapter properties for Display 2 below.

I am also using an "active" Mini DP to HDMI adapter as well. You might not need one, just test it without first. 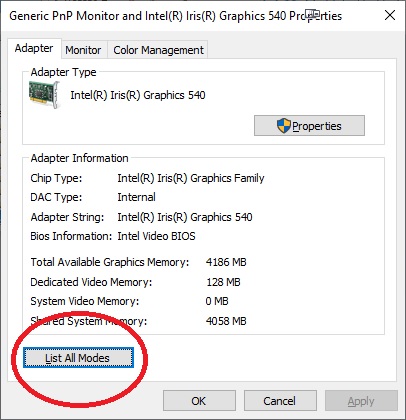 Barb Bowman
this is the cable that customers say works with LG ultrawide monitors
https://www.amazon.com/gp/product/B00S0BWR2K/ref=oh_aui_detailpage_o01_s00?ie=UTF8&psc=1
the chart showing monitors and refresh rates is at
https://support.microsoft.com/en-us/help/4039635/connect-surface-to-a-tv-display-or-projector
Barb
My Blog - http://digitalmediaphile.com/
MVP-Windows and Devices for IT
Windows Insider MVP
AP
Andrew Petersen

I'm experiencing the same issue as the OP. After walking through your steps and clicking List All Modes 1024 by 768 is the highest available option.

Note, when I have the cable plugged into my Surface Pro directly, I correctly see 2560 x 1080 resolution. It's only when I'm plugged into the Surface Dock that I run into issues.

As Barb Bowman has mention, it appears the adapter below is the only way to solve this issue. Is this the case? I'm currently using a DisplayPort to mini DisplayPort cable from Best Buy.