Platforms: Windows PC or Mac (not mobile, browser, or IOS)

One of the quickest ways of using things in Word is by using keyboard shortcuts to call up features.

Before you start assigning keyboard shortcuts you can save yourself some work by seeing Word already has a shortcut for that function. Don't re-invent the wheel! You can add a shortcut for a function that already has one if you think your idea will be more useful.

In another article I discussed ways to generate a list of keyboard shortcuts.

Here is a Microsoft Support Page that lists many (but not all) of the keyboard shortcuts for Word available on multiple platforms. (Be sure to indicate your platform.)

In the process of trying to assign a shortcut, Word will tell you if there is already a shortcut assigned for that function. Even if there is, you can add your own.

You can also create and save your own

The Microsoft Support Page on assigning shortcuts is here. It is Windows only and does not reach the depth of this article. Here is the only Support page I've found for the Mac but I do not know as much about Macs as Windows.

Things for which you can assign a Keyboard Shortcut:

Using a Prefix or Trigger in a Keyboard Shortcut

There are a large but finite number of possible keyboard Shortcuts and some require real finger dexterity. Users have fertile imaginations and can come up with more uses for shortcuts than there would seem available shortcuts. This is especially true if you do not want to overwrite commonly used built-in shortcuts.

Word allows one key combination to be the starting point or prefix or trigger for multiple shortcuts. For instance, you might wish to assign shortcuts to items that are in Backstage (show up under File). Rather than use multiple primary keyboard shortcuts, you can use Ctrl+Shift+F as a prefix to be followed by another keystroke to actually call a feature.

The initial prefix can be a Function Key or a key combination (that can include a Function Key). That can be followed by any single keystroke which can be a function key. Here is an example of a shortcut prefix being assigned to symbols for card suits:

The example above was to help someone who wanted shortcuts for symbols for the four card suits. The first thought was to combine Ctrl+Alt+Shift with each of the appropriate letters. However, it turns out that Word will not let you assign a the shortcut Ctrl+Alt+Shift+D. Another reserved Shortcut is the F1 key by itself. If you try to assign that, you get the support page on assigning keyboard shortcuts.

At this time, I do not have any sort of list of the reserved shortcuts. I just know that they exist. Be aware of that when you are setting up your shortcuts.

Where Should Shortcuts be Stored? Is this a question?

Actually, no, it should not be a question but the Normal Template may be the wrong place.

Keyboard shortcuts are stored in the Normal template by default. As a default, that is not bad, but we can do better.

General Suggestion - Store them somewhere other than in the Normal Template

In the normal template they are available in all your documents, but

Exception for Shortcuts for things stored in a Template or Document

You hoped I would get around to this eventually.

If prompted, save changes to the template. 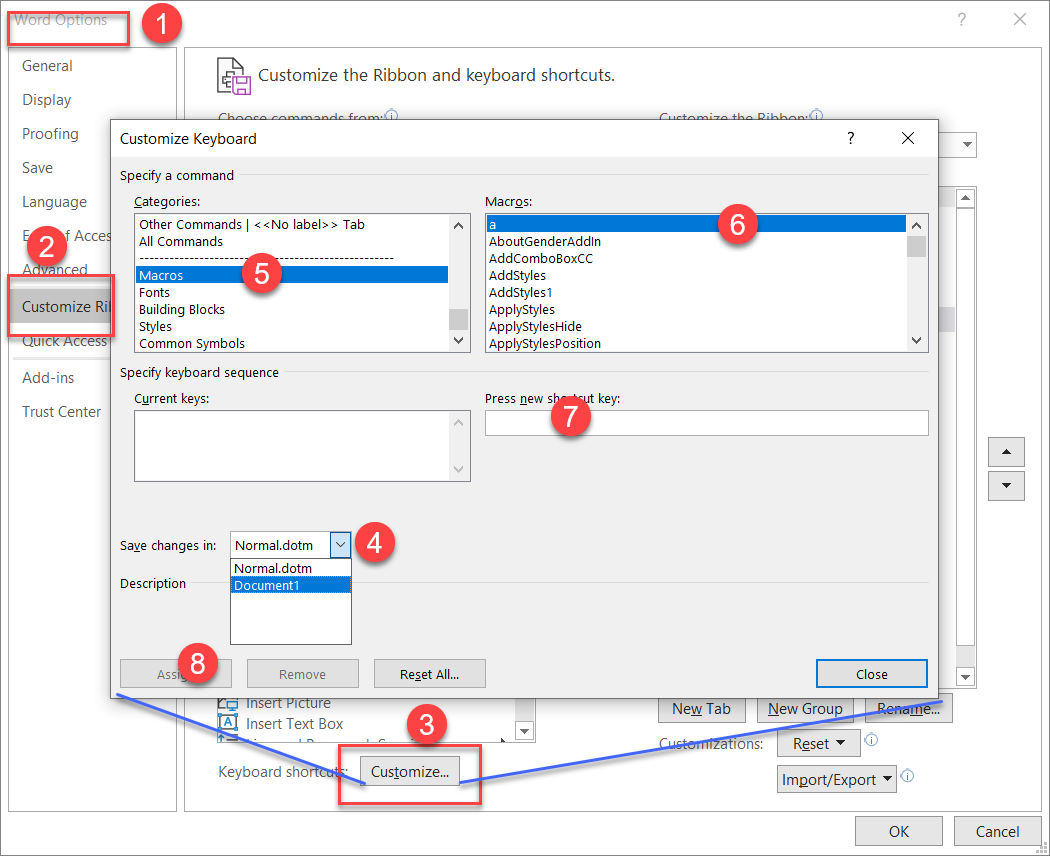 You can use the keyboard shortcut to bring up the Assignment dialog for any command on the Ribbon or in a menu.

The cursor will change into a clover leaf shape (

Then click on the command you want to assign, the dialog shown above will appear with that command and any already assignd shortcut.

Follow the steps above to choose a storage location and to assign the shortcut.

This method is not recommended because if you instead press Ctrl + Alt + "-" on the Numeric Keypad by mistake, you can end up deleting commands.

(See Create a custom keyboard shortcut and follow the instructions for Excel. Word is not mentioned. If this does not work, please let me know here.)

There has never been a way built into Word to move keyboard shortcuts from one document/template to another. That difficulty is part of the reason this article stresses making a decision as to where to save your shortcuts when you create them.

Almost twenty years ago, Chris Woodman developed code that creates an Organizer interface for Keyboard Shortcuts. As of this writing, it works fine in Word 2019 / Word 365 (both 32-bit and 64-bit versions). The original .dot version can be downloaded directly from an archival version of his webpage. An updated version that has Ribbon buttons in the Developer Tab can be downloaded from my website. (Both are free.) 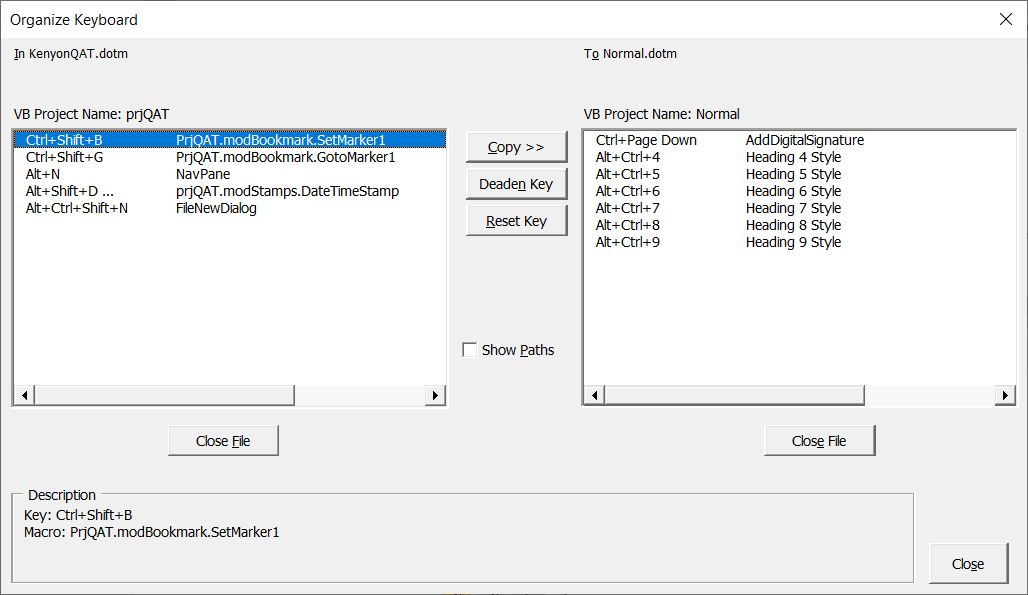 The dialog shown above is similar to the Styles or Macros Organizer in Word. It is the same in the .dot version or the .dotm version.

The .dotm version adds the buttons below to the Developer Tab in Word.

Updated to mention use of Ctrl + Alt + "+" on the numeric keypad although I do not recommend using this method.