How to Use Math AutoCorrect in Excel


Use Math AutoCorrect Outside of Math Regions in Excel


How to get Math AutoCorrect into Everyday Excel Worksheet Operations

In my (admittedly uninformed) opinion, Excel's separation of standard and mathematical autocorrect and the subsequent crippling of the latter most likely has to do with several common math symbols being used for reserved purposes within Excel. The single quote (e.g. tick or ASCII 0×039) character being the most obvious one as it is used to force Excel to consider a number or date as text when used as a prefix. Suffice to say that there are legitimate reasons why the decision to isolate Excel's Math AutoCorrect was made while Word's was not.

This just means that we have to work around the limitation and accept any shortcomings. While Excel's VBA use of the OMathAutoCorrect object is somewhat crippled, the equivalent VBA in Word is not. If we take all of the entries from the OMathAutoCorrectEntries collection and convert them as additions to the standard AutoCorrectEntries collection, then they will be available within all Office programs including Excel. The end results in each of the Office programs may vary.

Normalizing the Math AutoCorrect Entries with a Macro

Close Excel and all other Office programs then open Word to a new blank document and tap Alt+F11 to enter the VBE. Use the pull-down menus to Insert ► Module (or Alt+I, M). Paste the following into the new pane titled something like Normal - NewMacros (Code) or Normal - Module1 (Code).

Next acm
End With
Set cACEs = Nothing
End Sub

With that in place, tap Alt+Q to return to your blank document. Tap Alt+F8 to open the Macros dialog and run the macro. If a duplicate entry is encountered, the process will be paused and you will be presented with something like the following.

Note that I have chosen to demonstrate one duplication that can actually be displayed. Many of the Unicode characters will only be represented by a ? since a standard VBA message box cannot display Unicode. This does not mean that the symbol will be added incorrectly; like Excel this is simply a display limitation.

Accept or reject the overwrites. Anything not already found within the standard AutoCorrectEntries collection will be added without asking.

That is all there is to it. By converting the special Math AutoCorrect Entries to standard ones,  the limitation on using the special math symbol through auto-correction has been bypassed.

I've prepared a full listing of the Math AutoCorrect symbols on my OneDrive here for you to reference.

On a related note, I wrote a local Wiki article a while back on a similar topic on the use of stylized fractions within Office programs through additions to the standard AutoCorrect collection. Here is a link to that:

I hope you've found this Wiki article helpful and useful. Comments are welcome below.

Thank you very much for this. Perfectly clear walk-through and it works great. One question, though. This only returns lowercase Greek letters. In the math autocorrect menu, and in Word, if you capitalize the first letter it returns a capital Greek letter (e.g., \Alpha -> A). I'm really not very knowledgeable in macro codes, so nothing jumps out at me in this as causing--or negating--that. Do you know a way to fix this?

Thank you very much for this. Perfectly clear walk-through and it works great. One question, though. This only returns lowercase Greek letters. In the math autocorrect menu, and in Word, if you capitalize the first letter it returns a capital Greek letter (e.g., \Alpha -> A). I'm really not very knowledgeable in macro codes, so nothing jumps out at me in this as causing--or negating--that. Do you know a way to fix this?

I think the AutoCorrect function in excel can not distinguish upper case and lower case letter.

Thanks for the article...

I am unable to proceed as it throws an error when compiling the script (VBA). Included the screen print. Please can you help 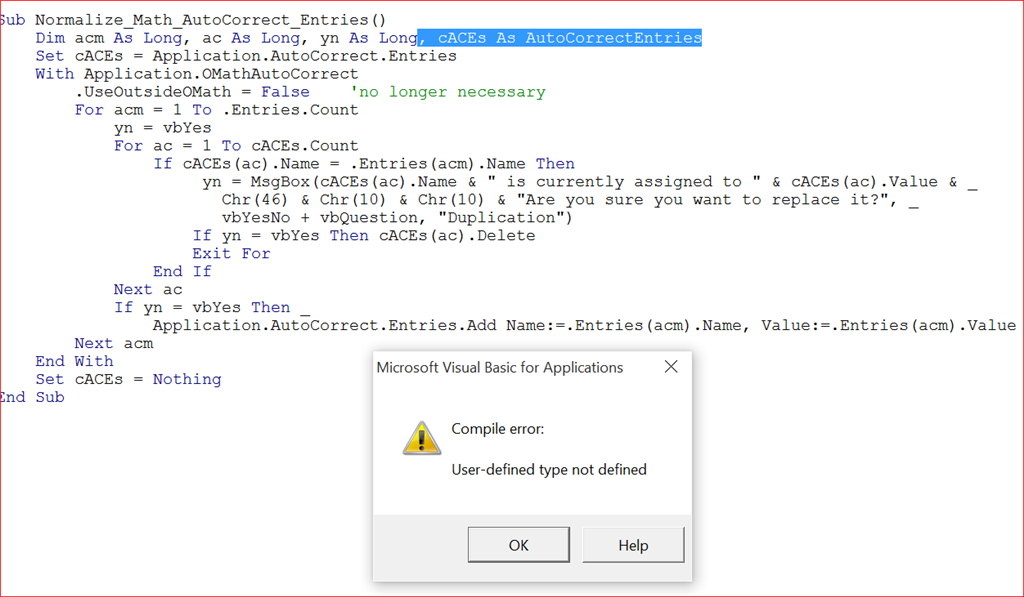 Jeeped
It seems you are missing a library reference in the VBE's Tools ► References. Locate the Microsoft Word 15.0 Object Library from the list and put a checkmark beside it.
RA
rawrpb

To type upper case Greek letters I have to type the entire thing in caps (\DELTA -> Δ; \Delta -> δ), but in Excel's equation editor I only need to capitalize the first letter (\Delta -> Δ).

Not a big deal, but do you know if this can be adjusted so that I don't have to type the entire thing in caps?

Thank you for providing this code! Got it working in Excel in Office 365, woot woot! I teach stats and constantly need to use xbar, sigma, mu, etc. When I first tried pasting in the code, I got a syntax error. Hunting through comments, I found a screenshot from Harishlyer and did a line by line compare. There's a difference between Harishlyer's code and your code in the main post.

Changed my code to match and ran the macro, went without a hitch. Then had to close Word before it would work in Excel.

Rockin! Such a time save, thanks so much.

PT
Ptheguy
Hi, could you please update this pot to reflect the changes in Excel 2016? I added the references you mentioned and still I get a run-time error 438: object doesn't support this property or method. I am using MS Word and Excel 16.0 Object Library.
SW
Sean Watts

read thru comments and resolved issues in minutes.

Engineering degree requires far too many greek letters in work.

saved my a load of hassle