Word 2016 (Traditional Chinese) installed on Win 8.0 Pro (Traditional Chinese) crashed after the latest update (v1701 build 7766.2060) when:
> opening a doc containing glyphs from U+13000 to U+1342F (fonts tried: Noto Sans Egyptian Hieroglyphs, Aegyptus and Segoe UI Historic), or
> inserting the glyphs concerned using ‘Insert > Symbol’ on a newly created doc.
There was no such crash before the update.

The crash could not be fixed with ‘Change’ in ‘Programs and Features’ in the Control Panel.

Besides, Egyptian hieroglyphs always appear as two squares in the ‘Symbol’ dialogue box in whatever versions, while appearing normal when inserted. 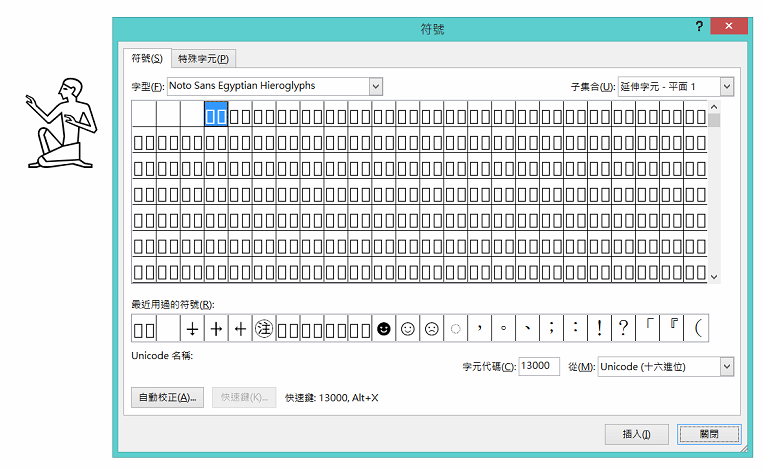 There are several reasons that cause this issue. To isolate your concern with Word 2016, we suggest that you run Office Configuration Analyzer Tool. OffCAT provides a detailed report and highlights known problems that are found when it scans your computer. This report includes many parameters about your Office program configuration.

Please post back with the status of the issue and we will be glad to assist you further.