There is an issue with Exporting / importing contacts to/from .csv and the 'List separator' when using Dutch language versus English.
(Not sure whether this could also apply whilst other languages. Did not check)
Outlook > Contacts > R-click column headers to Show Columns
Then select 'Address fields' from the drop down list.
Scroll down to e.g. Home Address City, Home Address Country, etc.
Note there is NO comma there, between 'Address' and 'City'/'Address' and 'Country'.
When changing the language into Dutch, a comma is added there, i.e.
Ander adres, straat  (=Other Address Street)
Ander adres, city  (=Other Address City)

The added comma (in Dutch and maybe also in other languages) is causing issues when importing/exporting .csv, viz. it creates two fields:

To avoid this one is required to manually remove the comma's from the header fields after exporting contacts from Outlook to .csv.

One by one, for each field. Or alternatively switch to English before exporting.

The comma (Dutch) serves no purpose and I would like to suggest to use the English format, i.e. "Ander Adres Straat"  and  "Ander Adres Plaats",  etc.

(not sure whether developers are looking here/whether posting here will reach the developers table at one point in time, or whether I should post in OutlookUserVoice) 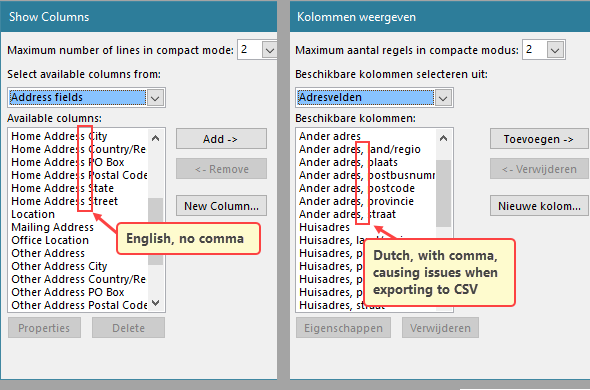 Last updated September 20, 2020 Views 315 Applies to:
This site in other languages