I have been running 9926 release since it was released and seemed to be having no issues and in fact the Explorer issues seem to have been fixed and the issue with cookies getting blocked seems cured as well (Hurrah).

However today I tried running one of my Hyper-V VMs and discovered that the network adapter was saying that the network cable is disconnected.  I checked the Hyper-V switch settings and that appears to be set up OK so why does the guest operating system think a cable's pulled out?

I then checked my other VMs and they are all having the same issue.

Additionally when I tried to save one of my running VMs after hitting this issue I got this error: 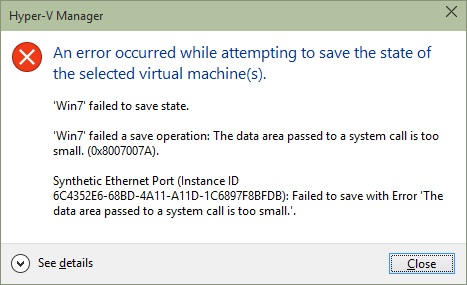 So as well as not working properly it seems to also be causing an issue when saving your VM.

Is the answer to create a new instance of the network adapter and disconnect the old one and connect to the new one or will this not work either?

I have reported this through the normal feedback tool as well.

I have figured out the fix, go into Virtual Switch Manager, create a new virtual switch which uses a different name than the existing network adapter you have used for your existing VMs.

Once that's created, go into the settings of each VM and change the network adapter to be the new one from the old one.

Hey presto your VMs can now get on the internet via your external network adapter and they can also be saved without the error message above coming up.

Go through each VM you have and make sure they all use the new version network adapter.  Once all your VMs are updated, go into the Virtual Switch Manager and remove the one that didn't work.

All is well with the world.

PepperdotNet
I had this exact problem, on build 10240. Creating a new virtual switch and moving everything to it fixed it for me. Thanks!