This brings you to build 14393.222. This is only available if you are an insider that has release preview.

Microsoft has issued an official script here that will fix this problem.  The previous workarounds are still listed below.

If it cannot install the update and rolls back (you'll see "undoing changes..." followed by another reboot), here are verified solutions:

CS
Christophe Sperandio
Thank you for the tip, indeed, that did the trick (although the dism command told the contrary... ;)). Daron Brewood
Went the Media creation tool and ISO / USB route myself too. Now on the latest version, so problem sorted.

Here are the links from above to the update from Microsoft servers:

There is also an offline DISM method to install the update, which I used.  Hopefully this will work for others too.

Create a Windows 10 install USB from the public release ISO file and also copy the applicable 32-bit or 64-bit update file, from the links above, to the root of the USB stick.  You can rename the CAB file to something shorter, if you want, such as KB3194496.cab.

Then boot your PC with the USB.  Once the first Install screen appears, use SHIFT-F10 to get a Command Prompt. Figure out what drive letter is your C: drive and what letter is the USB stick, as sometimes this changes.  One way is to run Diskpart and type list volume.  Exit ends Diskpart.

Change to the drive letter for your USB and use dir to get the filename for the update.  Use this DISM command to appy the update to your offline Windows:

Now exit the Command Prompt and close out of the Windows install to restart into Windows. 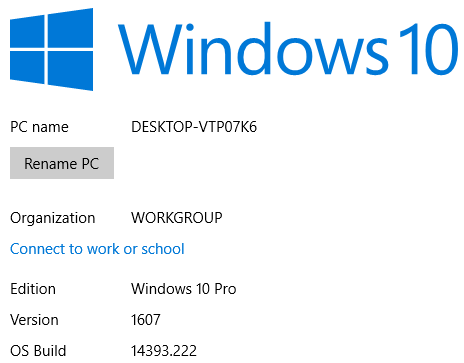 This did it! Thanks man, great find!

Made usb anniversary edition stick, booted it, shift F10, put in the commands to dism the update.cab file, got some error after , system could be incosistent, did sfc/scannow for safety, but all done in a few minutes in dos prompt on my ssd, and after reboot and check with winver: also 14393.222 now, and i also am a insider on slow ring... so all had to do with the double named update awhile back from M$. But thanks!

I tried using wushowhide.diagcab on an Intel PC - but, it didn't work.

It initiated another install of KB3194496 that failed and was backed-out during the reboot.

Edit: Just remembered something for those that used the USB/ISO re-install method that I did. Don't forget that you have a very large windows.old folder on your OS drive now. Mine was a little over 20 GB. To get rid of it just run disk cleanup and click clean system files.

Glad to see that the ISO/USB method is working for everyone else as well. Never though re-installing Windows could be so painless! I remember the XP days of at least 10 reboots for updates alone XD I know, I was just commenting about the Show and Hide tool.

According to some logs, apparently it's failing to delete a task with "Access is denied" error, and thus rolling back as a result. Try to delete it manually prior to installing the update if exists.

Failed execution of queue item Installer: Task Scheduler ({...}) with HRESULT HRESULT_FROM_WIN32(145).  Failure will not be ignored: A rollback will be initiated after all the operations in the installer queue are completed; installer is reliable

A. User
I just reinstalled from AU ISO and chose look for updates and keep apps and docs. Took 5 hours but now on 222 and off insider. Didn't have to install any apps. Why didn't MS suggest this?

Anyone try to use this web site with Edge.  Typing is excruciatingly slow.

WI
WillBthr
Probably because it is a time consuming pain in the a$$. I'll wait because I don't need xxxx.222 immediately on the one insider machine that rejects it. It will be interesting to see the MS correction is next week I would think. Five non-insider machines are fine here.