In Windows 8/8.1 Settings went through a schizophrenic period in regards to configuration Tools. First it was a hidden PC Settings modern app that featured limited options for customizing your PC. Later it evolved in Windows 8.1 to add more capabilities lessening the need to access the desktop Control Panel. In Windows 10, you can pretty much find all you need without turning to Control Panel. First of all, its windowed, but it’s very stoic and focused. Cleverly broken down into nine categories consolidating the plethora of items into groups of logical areas of the system. 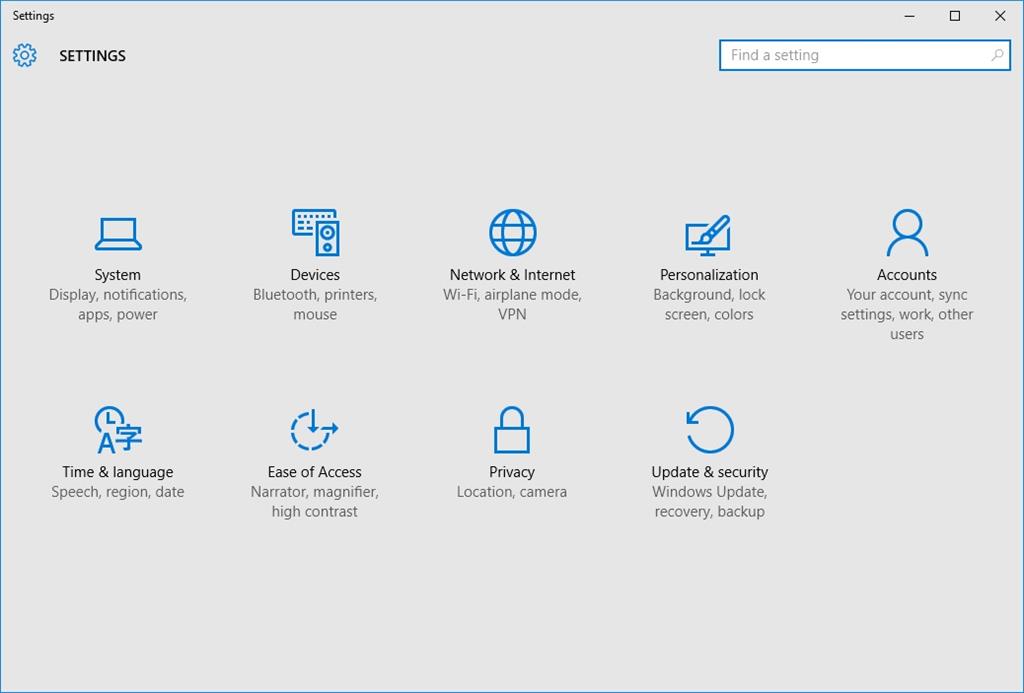 Settings provides a logical interface for modifying your Windows 10 experience

System primarily the point of contact for customizing Windows 10. If you can’t find a usual function, it is the first place you should check. Users will of course miss the flexibility of Desktop Control Panel (which is still there by the way) in this new Settings app. You can’t for instance view all settings which I think would lead to more confusion considering the wealth of tools the OS includes for adjusting your Windows configuration. The great thing is, there is almost a modern equivalent of what you would find in the desktop Control Panel. Of course some areas such as Power Options, Themes Personalization still lead to areas of the classic Control Panel, but its minor; the truth is you can stay in settings for most task. Privacy is a lot richer in functions with the ability to limit what apps can access in a variety of areas which include Location, Camera, Microphone, Contacts, Calendar, Messaging, Radios, Account Info, Other devices, Feedback and Speech/Inking and Typing. 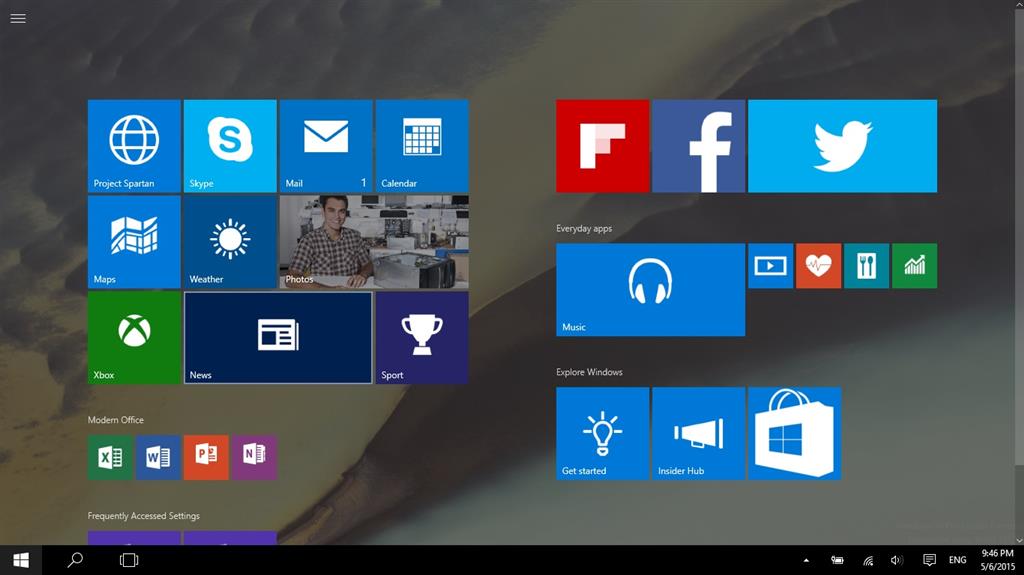 CONTINUUM - Windows 8 first introduced in 2012 reimagined the user experience with the Start Screen, a new approach to interfacing with Windows. Since then, Microsoft has refined the user experience. Even though many found the experience overwhelming, it did win a loyal fan base. Windows 10 reintroduces the familiar Start menu experience, now called Start. It promises to provide the best of both worlds with acceptable compromises both Windows 8 and Windows 7 users will love and enjoy. If you are coming from earlier releases such as Windows 8.0, be prepared for some changes. Functions such as Semantic Zoom, Start Tip are either no longer available or have been relocated and renamed to new functions. To enable the Start Screen (now called Tablet Mode) just open the Action Center in the Notification Area of the Taskbar and click Tablet mode.

This will present a Start screen like Windows 8. Instead of scrolling horizontally, you will scroll vertically and you can click the hamburger menu to access your application library. One of the immediate differences you will notice, the Taskbar is always on screen. Applications are not hosted on the Taskbar in Tablet mode, instead, you will find your running programs by activating the Task view icon. You can also cycle through apps using Alt + Tab if you are using a keyboard. To launch an app, click or touch the Start button to bring up the Start. You can also launch a favourite app if it is already pinned to the Start. If it’s not there, click the Hamburger menu at the top left corner of the screen and launch from the most used list or the All Apps list. If you prefer to not have the Tablet features, you can still enable a full screen from within Settings > Personalization > Start.

For enterprise customers, Microsoft is making it easier to deploy Windows 10. In the past, corporate customers with volume license Windows Upgrades were required to ensure that machines had a qualifying premium business SKU installed before they could be reimaged. The license compliance was at times weird, considering, you would normally have to blow out that preinstalled image anyway with your own custom image. Now, you can upgrade preinstalled Windows licenses to Windows 10 without having to do that. You can also perform an Easy upgrades from each edition by entering a product key. 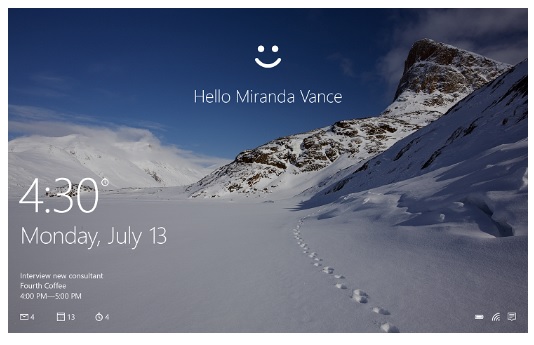 Microsoft is looking beyond its traditional mobile and desktop platforms and promises to bring Windows 10 to new areas, in particular wearables. Called Microsoft Holo Lens or Windows Holographic, the product can be best described as a smart glass unit that is cordless running Windows 10. Holo Lens uses advanced sensors, a high-definition 3D optical head-mounted display, and spatial sound to allow for augmented reality applications, with a natural user interface that the user interacts with through gaze, voice, and hand gestures.

Apps that take advantage of Windows Holographic include:

OnSight integrates data from the Curiosity rover into a 3D simulation of the Martian environment, which scientists around the world can visualize, interact with, and collaborate in together using HoloLens devices. OnSight can be used in mission planning, with users able to program rover activities by looking at a target within the simulation, and using gestures to pull up and select menu commands. JPL plans to deploy OnSight in Curiosity mission operations, using it to control rover activities by July 2015.

Among the sensor types used in HoloLens is an energy-efficient depth camera with a 120°×120° field of view. Other capabilities provided by the sensors include head-tracking, video capture, and sound capture. In addition to a high-end CPU and GPU, HoloLens features a Holographic Processing Unit (HPU), a coprocessor which efficiently integrates data from the various sensors. The HPU allows the HoloLens to perform tasks such as spatial mapping, gesture recognition, and voice and speech recognition, while operating without cords or wires. According to HoloLens chief inventor Alex Kipman, the HPU processes "terabytes of information" from the HoloLens's sensors in real time. Microsoft expects HoloLens to be made available "in the Windows 10 timeframe" and priced for use in both the enterprise and consumer markets.

Microsoft announced that Windows 10 will support USB Type-C and Dual Role standard. USB Type-C features much smaller design in addition to twice the speed of standard USB 3.0, meaning you can move data at 10 GBs per sec. USB Type-C is not like micro-USB ports, it features a design that makes it easy to use for instance, there is no wrong way to insert a male end into the female end. USB C can also deliver 100 watts of power and power 4 K displays other peripherals.

Microsoft recently announced that Windows 10 will include FIDO 2.0 support. FIDO short for Fast Identity Online provides alternative methods to using traditional passwords for authentication. Some of the services that FIDO specifications in Windows 10 supports includes Windows 10 sign-in, Azure Active Directory and access SaaS services like Office 365 Exchange Online, Salesforce, Citrix, Box, Concur. With Windows 10, for the very first time Windows devices and Microsoft-owned and partner SaaS services supported by Azure Active Directory authentication can be accessed end-to-end using an enterprise-grade two-factor authentication solution – all without a password. Windows 10 will also include Active Directory integration for on-premise scenarios and Microsoft Account integration with other Microsoft services such as Outlook.com, OneDrive. Windows 10 includes a new touch or facial recognition authentication experience called Windows Hello. Unfortunately for me, I was not able to test it since it requires specific hardware. 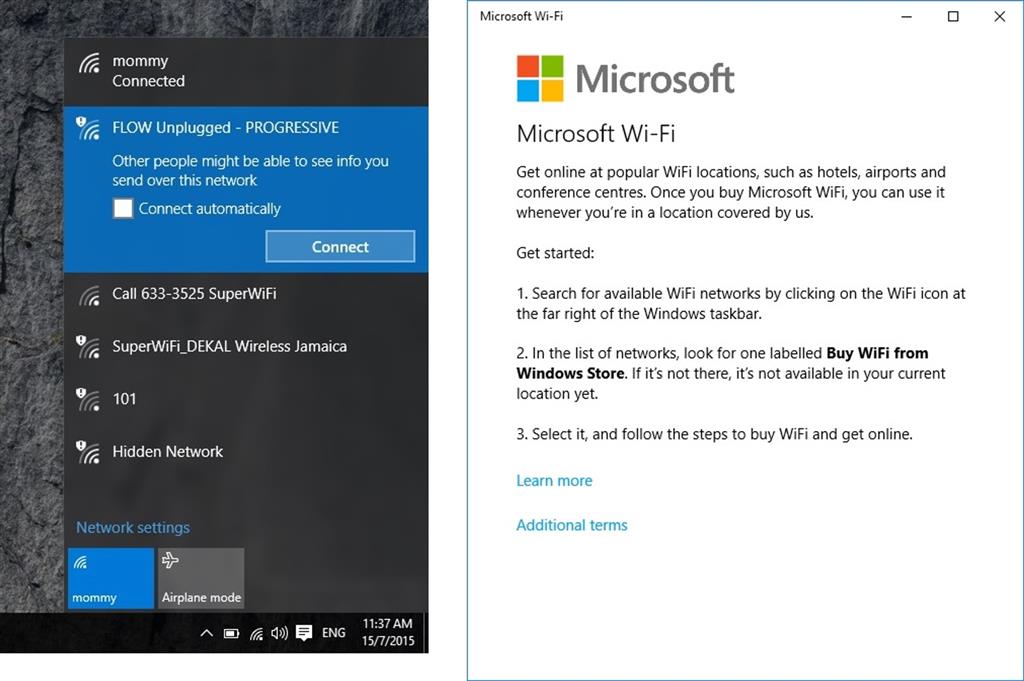 CONNECTIVITY Windows 10 features a slightly revamped Network Flyout that provides quick access to wireless and Virtual Private Networks. Users who are on metered connections will miss the old Show Available Networks (now located in Settings > Networks), which would let you define a connection as metered. Microsoft seriously needs to think about persons on limited data plans because Windows 10 uses a lot of it. Many of the desktop network interfaces have been modernized and relocated in the Modern Settings app. Users will find access to other settings such as Airplane Mode, VPN, Dial-up, Ethernet and Proxy settings here. 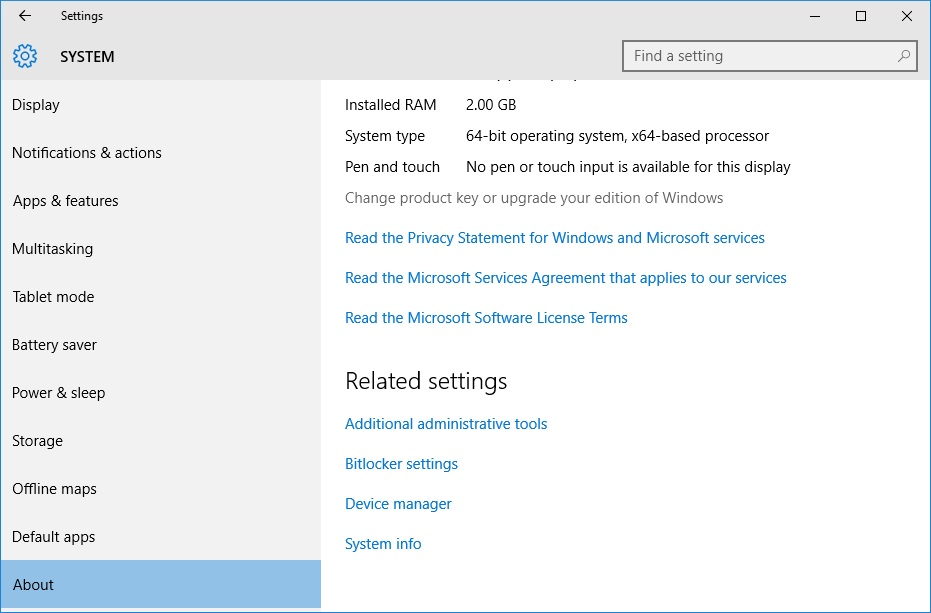 A new addition is Data usage which gives you a summary of your application data usage. There is not much you can get out of it since it only displays each apps data usage. I wish there were options to define limits on certain apps especially for metered connections, something I notice I have excellent control over on Android. Windows 10 includes a new wireless service called Microsoft Wi-Fi formerly Skype Wi-Fi. The service allows users to purchase credits which they can use to connect to paid networks. Microsoft is partnering with providers and carriers around the world to provide the service.

Privacy – Windows 10 includes a comprehensive privacy setting. Some Universal Windows apps will request access to your location to provide accurate information. For instance, Maps will use Location services to find information within your region. You can customize this and limit which apps have access to your information.

I installed Windows 10 on a Toshiba laptop using a wireless connection and now that connection is gone.  I cannot pick up any other wireless either.  So while it is great to read about Microsoft wi fi I wan to know hat happened to it.  Am now waiting all day for help from Microsoft as it seems they are overwhelmed with problems.  I have tried al the solutions but none work.  Thanks Microsoft.

AB
Akshay Bharwani
If you have tried all the solutions, I assume you also have installed the latest drivers for your Network Adapter. Both, by the Manufacturer and from Toshiba. If yes, I advice you to clean install Windows 10 by using Windows 10 ISO, that might resolve the problem.