I know MSMoney is a discontinued Microsoft product since June 2009. However, I have over 10 years of financial records in MSMoney. I purchased & tried Quicken 2015. I prefer MSMoney over Quicken 2015.  MSMoney worked fine on all previous Microsoft OSes listed above including the first couple of Win 10 TPV builds 9926 & 10041. 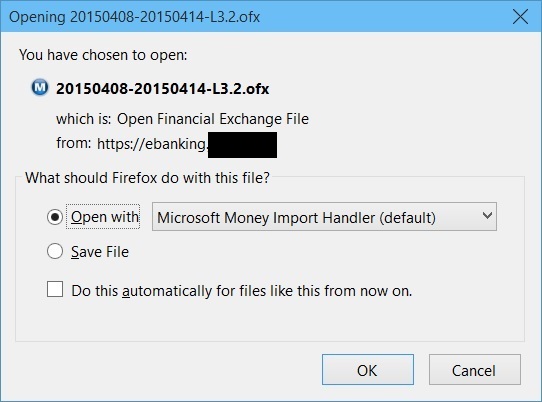 So to work around the MSMoney  issues above. I installed Window 7 in Hyper-V VM just to run MSMoney & manage my finances. What a pain!!!

Quicken 2015 will be the big winner with this bug introduced in Win 10 TPV.

My Opinion is that MSMoney is still the best Personal Finance Management Software ever released for the Windows desktop PC.

I am being forced to use Quicken. Much rather stick with good Ol' MSMoney. However, running Windows 7 in a Hyper-V VM just to balance my checkbook is overkill. Like swatting a fly with a sledge hammer.


This thread is locked. You can follow the question or vote as helpful, but you cannot reply to this thread.

The modified dll is only needed if you want to import downloaded statements, if you just enter everything yourself it is not needed.

I downloaded VS Express 2013 from Microsoft last night (it came with Update 4) - I mounted and installed it with no issues this morning.

I downloaded it yesterday afternoon: 6.51GB download took 3 hours... burn to high capacity DVD and install on Windows 10240. Seems to work. That was 4 hours just to get to a state to begin a job....

While it was downloading, I implemented the QIF parser with VB.Net on Windows 8.1. Fairly simple to parse QIF into a class array row in a collection then create a structured, delimited text stream for display or import to Excel. The trick with QIF is that it is tagged text, but not ordered.... hence no simple way to import into Excel because the field ordering will be hit and miss and the first character must be deleted. Could easily do it with VBA in Excel.

At least now I can export all of my accounts in MS Money (on Win 8.1) into QIF for import into Excel for simple accounting....

Back to where I was in the early 90's - using a spreadsheet for finances... and then MS Money came along... and then went away...

Changing compatibility modes has no effect.

After much searching I have found this works for me

I'm not sure about side effect by this change. registry change is at own risk.

Awesome! That worked!  Does your MS Money installation show it consumes 100GB in Programs and Features?

Awesome! That worked!  Does your MS Money installation show it consumes 100GB in Programs and Features?

Brilliant -  I just found the same problem with needing IE6 with build 10240 after Money working fine with all previous builds. The registry edit fixed the problem for me - now need to wait to see what the unexpected consequences are......

My Apps and features is showing the installed size of MS Money as Unavailable.

The size reporting error is yet another bug in the regression trail from Windows XP to Windows 8.1 and now Windows 10 that possibly started with Vista and hasn't been found and fixed since.

There are quite a few little bugs created after Windows XP, that have been carried forward into Windows 10... MS Money is a victim of all those little regressions.

If you managed to export QIF:

Copy your mny file; then open it and try to import the QIF file that was just created.

If you can successfully export and import QIF; then you have a viable patch for Money.

Hence: I am exporting all my accounts into QIF. Last resort would be buy Quicken as a replacement.

My QIF utility can now import QIF, display and edit in a grid, export original or edited data to csv or tab delimited text, or save edited data into QIF. CSV opens in Excel... that may be back to where I was before MS Money I the early 90's... but at least Excel will be around as long as Microsoft exists... or I say to hell with it and develop my own app.

Microsoft needs to refocus on their core reputation of being the Business and Technical Desktop rather than chasing the mass consumer market of abbreviated data consumers.... Apple grabbed that... let them have it. Apple and Google dominate the mass consumer market. Microsoft is blowing money to try and increase market share in the fickle phones. Poor Nokia is no more... another Microsoft blunder.

Us old bods that actually create and manage data on our own computers with the likes of MS Money are a dying breed?

KU
Kureosity
MS Money (H&B Sunset edition) is now working 100% for me on 10240 (including QIF import), thanks to the registry hack and modified dll that im-mad pointed out in this thread. Happy to have Money back!
BE
BepoZB

I am waiting to MS to fix the problem. Hacks are not a good solution. I am using MS Money last 20 years. Please make MS Money work on W10 with no hacking...

I am waiting to MS to fix the problem. Hacks are not a good solution. I am using MS Money last 20 years. Please make MS Money work on W10 with no hacking...

I'm sure you are aware that Microsoft stopped supporting MS Money years ago.  I think you should accept the solution that the community has provided to you.  You should be grateful that there are people who have spent a lot of time to help you, me, and anyone else who chooses to continue using an unsupported product.