Hello, I have recently installed Windows 10 Technical Preview on a HP Pavilion a6622f., with monitor Samsung SyncMaster B2430. This computer originally came with Windows Vista installed. A few months ago I downloaded the Windows 7 Enterprise Evaluation from TechNet, which also worked fine. However, when I upgraded to Windows 10, I immediately noticed that the screen was stretched out; going to the Control Panel to change the screen resolution, the situation has improved somewhat but is still noticeably stretched. 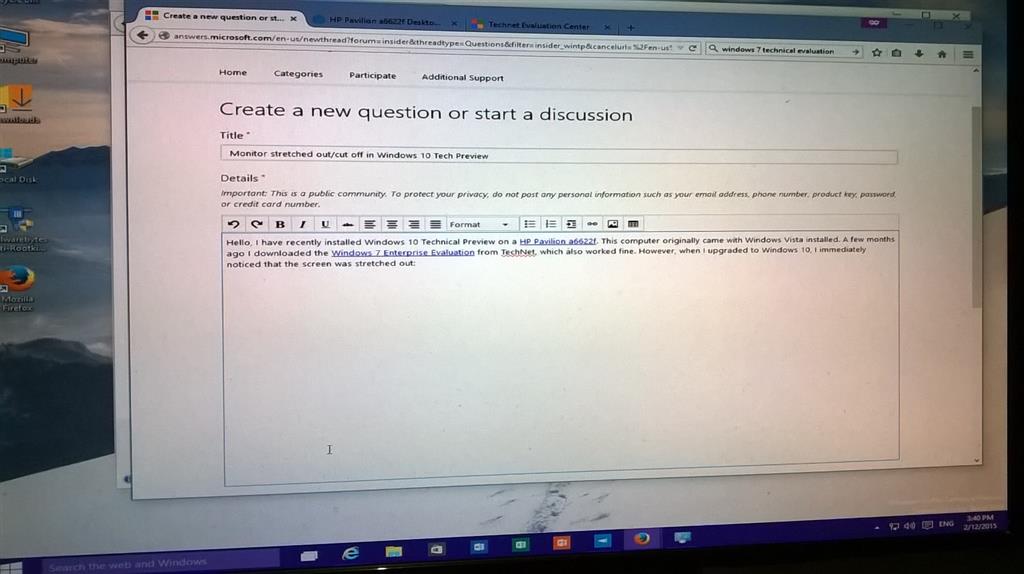 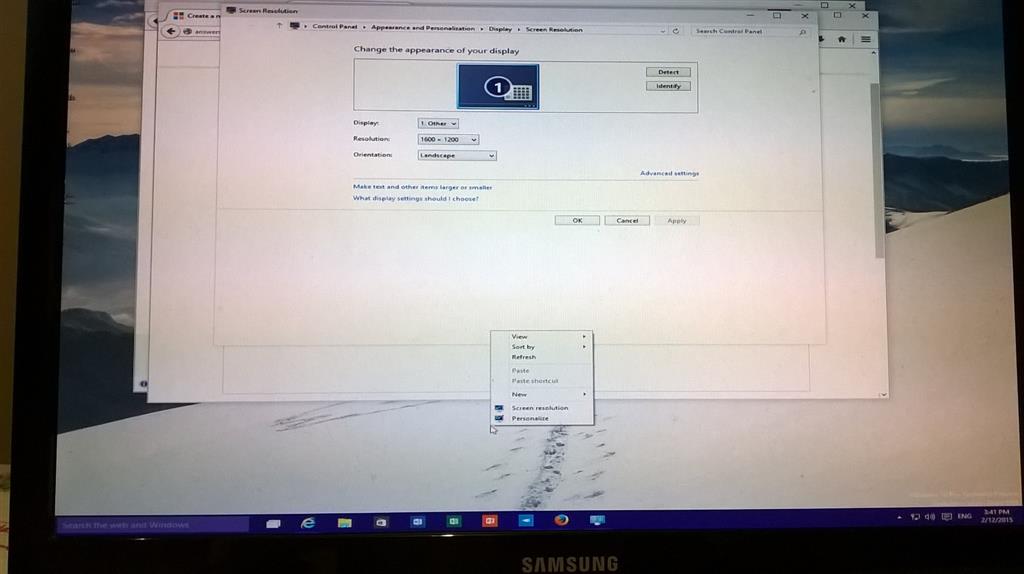 As you can see, the 1600x1200 one looks a bit (only a bit) less distorted than the 1400x1050; however, the left side of the screen is cut off (including the Windows button, although it is still click-able) and there is a black bar occupying the right side of the screen.

When I first went to the Control Panel, it recognized my monitor as a "Generic Non-PnP Monitor" (read: it didn't know anything about my monitor), so it did not list the appropriate resolutions for my monitor. To solve this problem, I tried running the Device Manager from the Control Panel and adding the driver for my particular monitor; I expanded the Monitors tab, right-clicked "Generic Non-PnP Monitor", and updated it with the "SyncMaster B2430H /B2430HF (Analog)" driver. After that, I went back to the Control Panel expecting there to be some better screen size options, but the only difference is that now, my monitor is classified as "Other".

After looking up questions by other people with the same problem, I found some (here is one of them) that suggested that I should update my graphics card driver under Display adapters in Device Manager. So when I expanded the Display adapters tab, I found my graphics card driver wasn't there- the only thing there was the "Microsoft Basic Display Adapter".

So I guess, my questions are (from least to most important): how can I reinstall my graphics card driver? What is causing this problem? Is there anything I can do to fix it, or am I stuck with a stretched screen?

I can understand how inconvenient this must be on your end. I’d be glad to assist you with this issue.

Follow the steps below on how to install the driver in compatibility mode:

Hope this information is helpful. Please do let us know if you need further assistance, we will be glad to help you.