Just wanted to report my detailed feedback on what's wrong with W10 on my Surface Pro 3, for me.

What's still broken and/or must be improved:

That's the only way for MS to REALLY notices us.

Other Suggestions with a Concept Image (Thanks Joseph-WilfriedRosenbaum ): 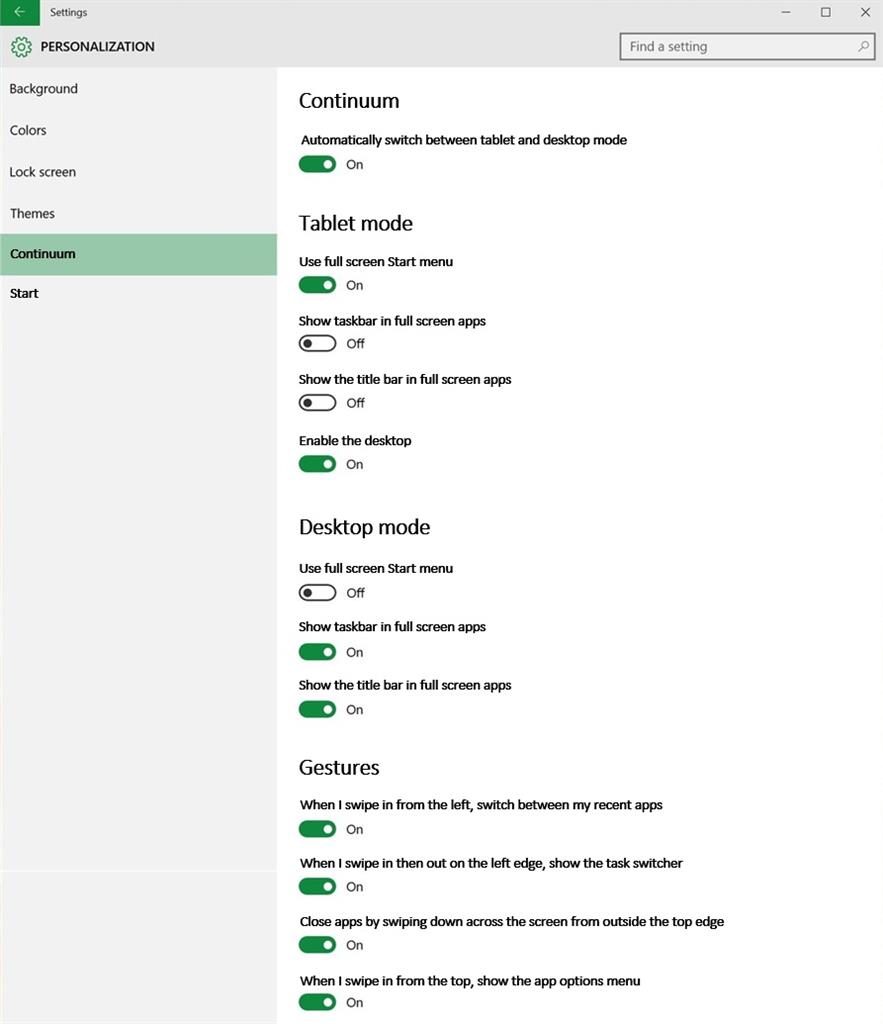 and (this is new, even reporting this Discussion!)

Did anyone noticed that setting 200% scaling in Surface 3 makes everything larger in start screen and some apps? (desktop side os ok for touch).

Some apps are now unusable (eg. mail) and snap is disabled. This is because windows 10 uses the scaling factor to scale everything (windows 8.1 scales the desktop side only). So, while we've been fighting to get back tablet features, this happened:

Here's a Uservoice to try to undo this:  https://windows.uservoice.com/forums/265757-windows-feature-suggestions/?query=sync%20start%20menus%20between%20various%20windows%2010%20devices

I'm about ready to uninstall the two copies of ten I have running -- one on a Surface 3 and one in a VM. Between this latest news, the outstanding issues in this thread, and the destruction of Onedrive due to the elimination of placeholders I'm pretty much done.  I'll be on 8.1 for awhile.

Thanks for trying, all. I'm glad at least some of you will be able to enjoy 10.  Maybe one day I'll be among you, but July 29th will not be that day.

Thanks for trying, all. I'm glad at least some of you will be able to enjoy 10.  Maybe one day I'll be among you, but July 29th will not be that day.

An additiional issue (which is also applicable to desktop mode).

But Win 10 applies this scaling to he start screen and Universal apps (from a remote desktop). The result is:

-In some apps like mail everything is too big (you can't see the list of emails and current email in the same screen).

Other people complain that they see things too small.

Here is the uservoice where you can vote:

I'm writing this right now from my Surface Pro 3 with 8.1 - Man, I love this thing. I've been testing 10 for so long on my Teclast x98- it kind of bums me out to have sacrificed that cool little tablet to Windows 10. It was way more impressive on Windows 8.1 . It had better performance too.

Microsoft better pull their heads out of the sand fast. Reporting huge quarter losses, and yet their Surface line was a shining light of profit in a terrible quarter, and now with huge hopes on Windows 10. So, the one area they did well in they're about to gimp with this deeply flawed new OS that tosses Tablet UI under the bus.

The future of pc industry is actually windows touch device and 2 in 1 hybrid/tablet PC.

MS has to focus more than ever to that functionality given the best of the best of his efforts.

returning to the past and last decade behavior is huge step down to the ecosystem of Windows.

As told before the hybrid/2 in 1 device is the most growing segment of pc industry and MS what is doing now has no excuse at all.

The desktop mode actually is better for /tablet touch use than tablet mode.

It's better now to focus to make the desktop mode more and more touch friendly and get rid of it the tablet mode immediately.

With 8.1 they had the best tablet UI way better than android or iOS,they had truly treasure in their hand and now simple destroy to go back to last decade just to satisfy Windows 7 user and ignoring that the touch is the future of Windowd pc industry.

In Win 10 do we have the ability to invoke search by just typing in  start screen(tablet start menu in 10)  similar to 8.1? Or do we have to click the search box on taskbar to bring up search/cortana? I tried 8.1 method on 10 and no search box popped up

Am I doing it wrong or is that feature also gone?

(BTW Stardock has updated classic start screen for 10. Similar to Win 7. No luck for tablet mode though)

I could not agree with you more.  I see three primary platforms.  Phone (up to 6", maybe 8), tablets/convertibles/touch screens (10" and above), desktops (all screen sizes but mainly 12" and above plus multiple screens, all optimized for keyboard and mouse).

Apple and Android own the phone platform.  Apple first and then Android hit the markets at just the right time with the right blend of the latest touchscreen phone technology with a good user interface.  It did require a learning curve but once learned it was fun to use and set the standard for phone screens

Microsoft owns the desktop with Windows 7 being a fabulous, evolved platform for getting work done on a desktop environment.  It is extremely efficient for mouse and keyboard use and I have never been hesitant to upgrade to new versions.  And that's all the way from DOS to Windows 7.  Going from DOS to Windows was obviously the most dramatic UX change.  Although there was a learning curve (particularly for someone very comfortable using the keyboard with DOS commands), the paradigm shift was definitely spot on.

And then there are tablets and larger touchscreens.  Apple ported their phone platform with great success but that trajectory has slowed.  I think the trajectory has slowed because tablet users (at least me) would prefer something more robust on larger screens than what you get with essentially a ported phone OS.  Tablets and touch-screens should be able to handle the more sophisticated desktop type applications as well as the ported phone apps.  Phone apps on 8 or 10 inch tablets may be adequate but once you go larger than that, they need to be so much more.

To me, Windows 8.1 was that new paradigm shift needed for tablets/convertibles/all touchscreens.  Yes, there is a learning curve, but just like going from DOS to Windows, once learned, it is a joy to use and extremely efficient.  Windows 8 and 8.1 has suffered only because Microsoft failed to adequately port and keep as a default, the Windows 7 start menu. After all, it has evolved to what it is because it is simple and efficient for keyboard and mouse. Why change it unless it somehow becomes easier and more efficient.  Forcing the new tile based start screen on desktop users without allowing them to make it a choice over the start menu was huge mistake.

Initially, I thought Window's 10 was going to rectify the PR damage by taking the best of Windows 7 for desktop and mouse,  the best of Windows 8.1 for touch screens,  and blend them with the new features such as Cortana.  Well, Microsoft appears to have thrown the baby out with the bathwater since many of the new paradigm features that made Window's 8.1 a joy to use on tablets and touchscreens are gone.  As to why, I'm not sure other than Microsoft hopes app developers for Apple and Android will use some of the new development software that is supposed to make it easier to port iOS and Android apps to Windows.  If this is the case, I think it's wrong because as I said earlier, who wants phone and small tablet apps on desktops and tablets with larger screens.  Microsoft should be doubling down on providing support to port robust desktop programs and more sophisticated productivity apps to it's new Window's 8.1 touch paradigm.

Alas, it's not to be.  A huge amount of resources have now been spent on reengineering the user interface and many of the 8.1 programs which in my mind worked great.  Many still needed tweaking but they have now been replaced and not for the better.  All I can do now is just watch from the sidelines and see what happens.  I will not be upgrading anytime soon.