RS-PreRelease Build 19536 is Live to Fast Unfortunately, accessing my existing Storage Pool from build 19536 made it inaccessible from my public build 18363.535. This was a dual-boot setup on my primary PC. I thought I would just install build 19041 instead, thinking that I could access my Storage Pool from there, but that also did not work. 19041 showed my ReFS-formatted Storage Pool drive as RAW.

So I was forced to wipe my SSD and install build 19536 for my primary OS, as ALL of my data is on my Storage Pool, including my Hyper-V VMs.

I have run into this in the past, where simply accessing my ReFS disk with an Insider build converted it to a new version of ReFS, making it inaccessible from any earlier Windows 10 Version.

As I anticipated, my ReFS-formatted Storage Pool has been auto-upgraded to ReFS Version 3.5. Windows 10 Versions 1903 and 1909 use ReFS version 3.4.

The only way to have prevented this is if I had mounted the ReFS drive as read-only, but I wanted to use some VHDX files that I had on it to test if creating a new Storage Pool was now working, as the blog indicated.

For reference, here is how the version of ReFS shows on build 19536: 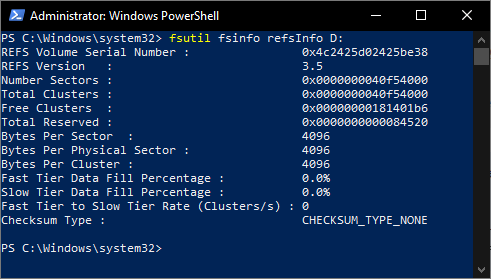 So a WARNING to anyone who uses a disk with ReFS format:

Do NOT access your ReFS drive from the rs_prerelease builds, or it will be auto-upgraded to ReFS version 3.5 and become inaccessible from any previous version of Windows 10.

This update history is getting longer and longer, several pages, several months...

How do I cleanup the update history other than doing a clean install ?

The usual suggested methods I find online don't work with these builds.

Even after an Image backup and restore the history is still there.

Where is the history saved ?

I don't know where the history is saved or how to clean it but there's something fishy going on.

In the past, the Reset Windows Update Agent Script used to clear WU's history but not anymore.

Be aware that item #11 (Deletes any incorrect registry values) also deletes WIP settings, meaning you have to re-link your account, chose a ring and restart.

Clearly they changed where they keep the update history, but they didn't give out any information on the changes they made.

SL
slayerking
Update fails at the driver stage (35%) it reboots then keeps rebooting when it tries to load and eventually undoes anything it has done and reverts. Going to try stuff around and see what's going on.

Any 3rd party anti virus, security, cleanup programs ever installed on the computer?

What OS build are you on?  Hit the Windows key, type winver, hit Enter.
Or Windows key+r, winver, OK

-----------
If this answers your question - Then mark it so. Then others may find it.
---------------
Around computers
since 1952
lacrumb
SL
slayerking
All good mate I'm on top of it. Another try, Install went much faster but got to 30% done its reboot and same thing. Going to start knocking the drivers out one by one until I find the mischief maker ;)

I gave this a shot and discovered that if you add a SATA drive to the VMware VM, it can see it with build 19536. It just doesn't detect the usual SCSI drive. I just added it after I had already booted from the ISO and it was able to find and install to the SATA drive.

Don Cuthbert
Some devices have trouble upgrading with any peripherals plugged-in, especially USB port devices or SD Cards.
Don
SL
slayerking
Yeah got nothing plugged in but mouse & keyboard. I'm leaning towards the amd drivers for the video card as they got installed from WU the other day and now they don't want to update even with AMD's own radeon installer, So I have totally removed them and going in again to see how it goes. Excellent, just installed both on the fixed and on the laptop, everything is ok, it took some time (3 hours) between downloading, pre-installation and installation but everything went well, for now it seems to be going well

Thanks for your advise.

I just changed the system disk from SCSI to SATA, and then update to 19536 was completed normally!